I wanted to make something horrific for halloween and I decided cake pops would be perfect. You can eat them yourselves, make them with your family or even give them to trick or treaters!

I made white chocolate chip vanilla cake and covered them in matcha white chocolate, matcha is a fantastic natural alternative to green food colouring and tastes divine. I use Kiss Me Organics Culinary Grade Matcha

, as it has a great taste and is also really green and it gives the brightest green colouring I’ve found, it’s also cheap for over 100g!

You’ll also need a cake pop mould, I used this  Sweetly Does It mould.

I also decided I wanted to get some matcha involved somehow and while watching the Walking Dead premiere I decided that the perfect combo would be matcha green cake pops with zombie jack o lanterns! I had one white chocolate cake pop that I made before adding the matcha, so I had an idea to have the white chocolate one as a human. The finished result is the display of the women running from the zombies. It might not be that good (I’d never written with icing before) but they tastes fantastic which is the main thing! 🙂

So here’s the recipe:

180g of self raising flower

1. First thing you’ll want to do is cream the sugar and butter in a bowl

2. Add the eggs one at a time and beat gently with an electric whisk and add the vanilla extract

3. Sieve the flour and baking powder in to a bowl and combine

4. Add the dry ingredients to the wet mixture and mix thoroughly

5. Add the milk and stir until the batter mixture is smooth and your desired amount of white chocolate chips.

6. Grease your cake pops mould thoroughly in all the holes and spoon the mixture in to the holes, add the lid of the mould. You can use a cocktail stick to prod the cake pops through the hole in the mould, to check if they’re cooked.

7. Place the mould on a tray to stabilise the cake pops while they cook and cook for 15-20 mins

8. Remove the cake pops when they’re ready and leave on a wire rack to cool. Take the top of the mould off and you should have perfect cake pops!

9. Last step is to melt some white chocolate in a bowl over a pan of boiling water, add the amount of matcha you like. Dip the cake pop sticks in the white chocolate and leave them to set slightly, this will help to secure the cake pop in place on the stick (you can see my fallen cake pops as zombie heads in the background lol). 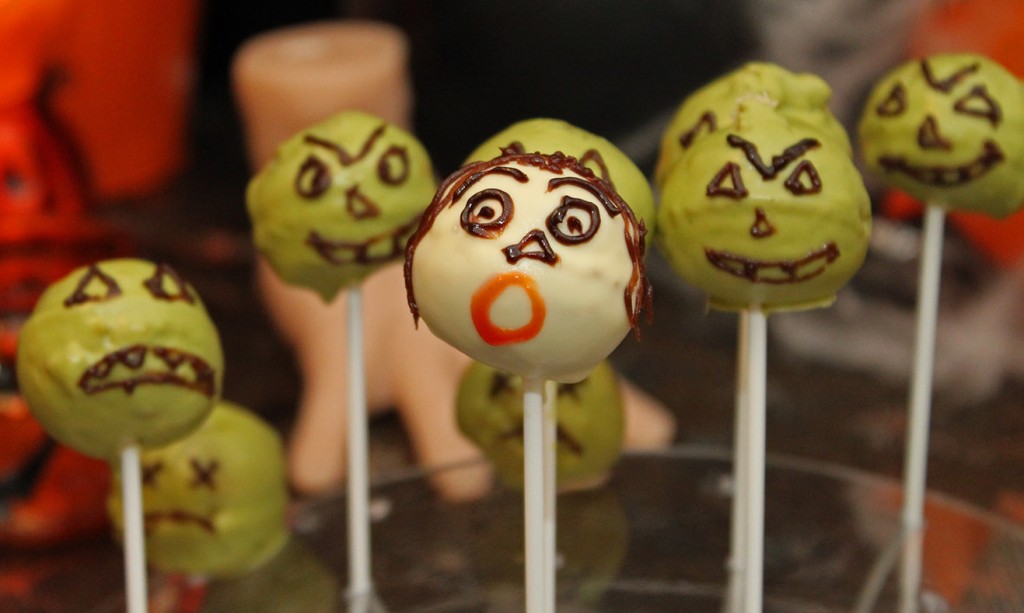 Thanks so much for reading and I hope you have a fantastic Halloween! 😀

The ingredients you’ll need for this recipe are: 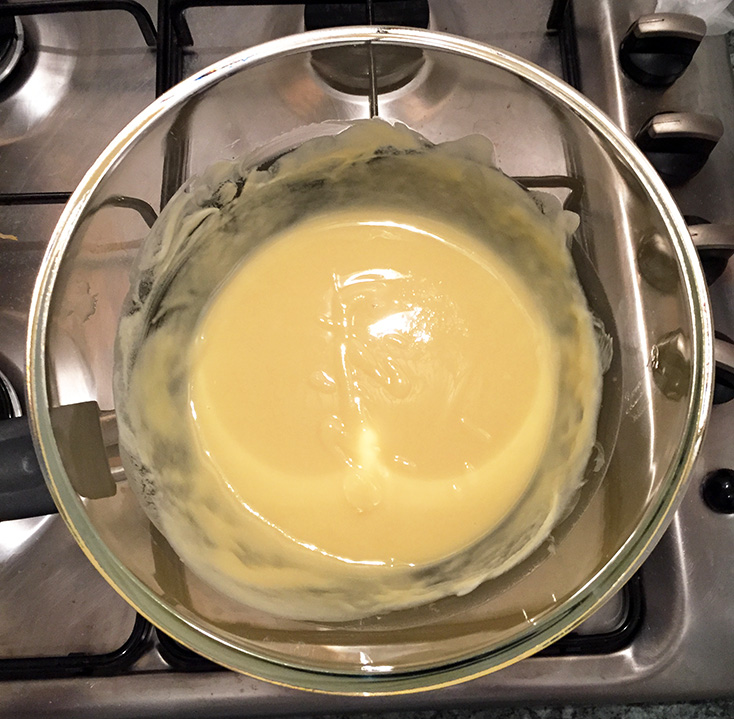 1. Put the butter and white chocolate in a heatproof bowl and melt over a saucepan of boiling water, then add the sugar. 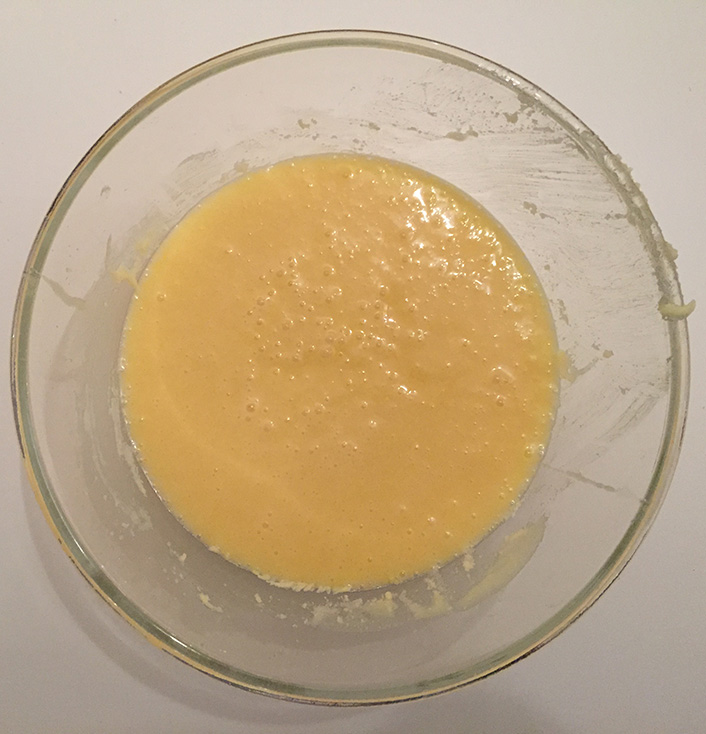 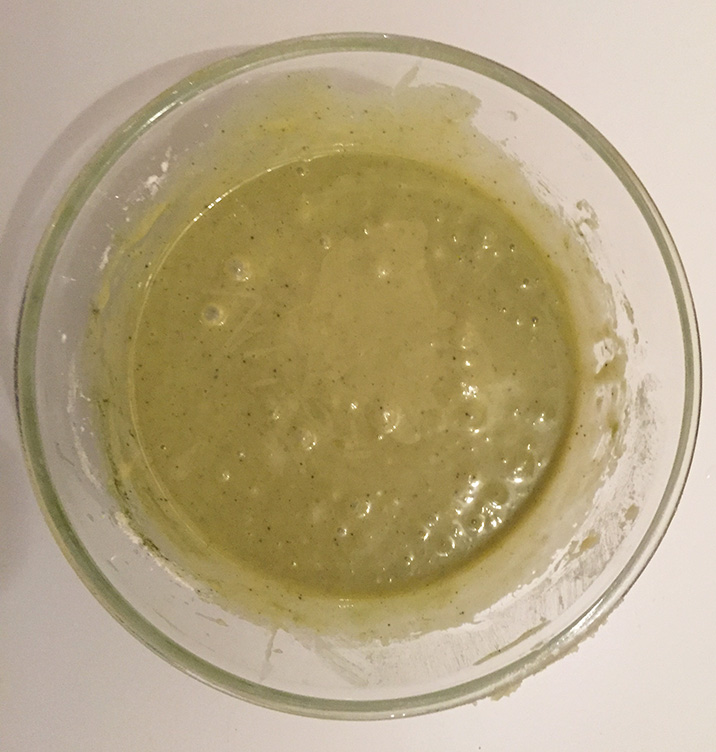 3. Sift in the flour and matcha.

4. Fold in the white chocolate chips but hold some back to sprinkle on top. 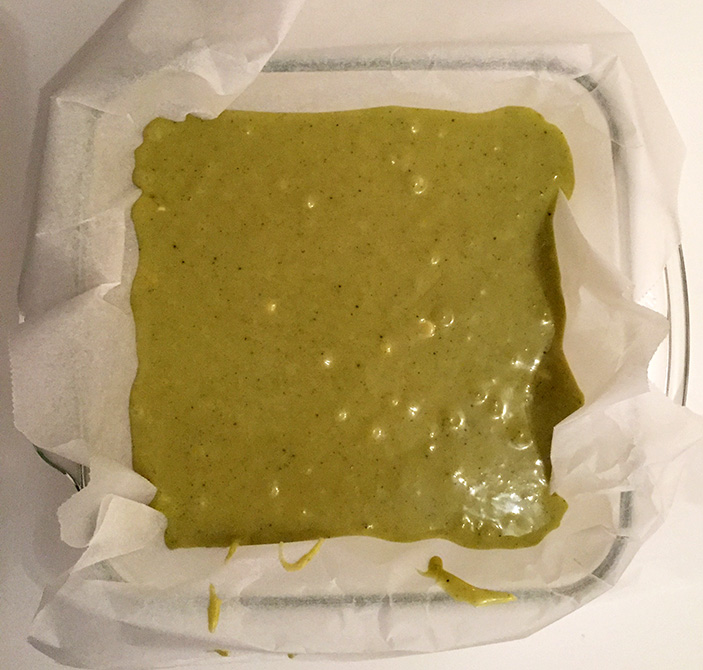 5. Pour the mixture in to a tray lined with greaseproof paper

6. Bake the brownies at 200° C for 5-10 minutes and then remove from the oven, cover with foil and bake for a further 25-30 minutes. I made these at my house and also my partners and I found the cooking time varied between the two so keep an eye on them and test them by dipping a knife in the middle 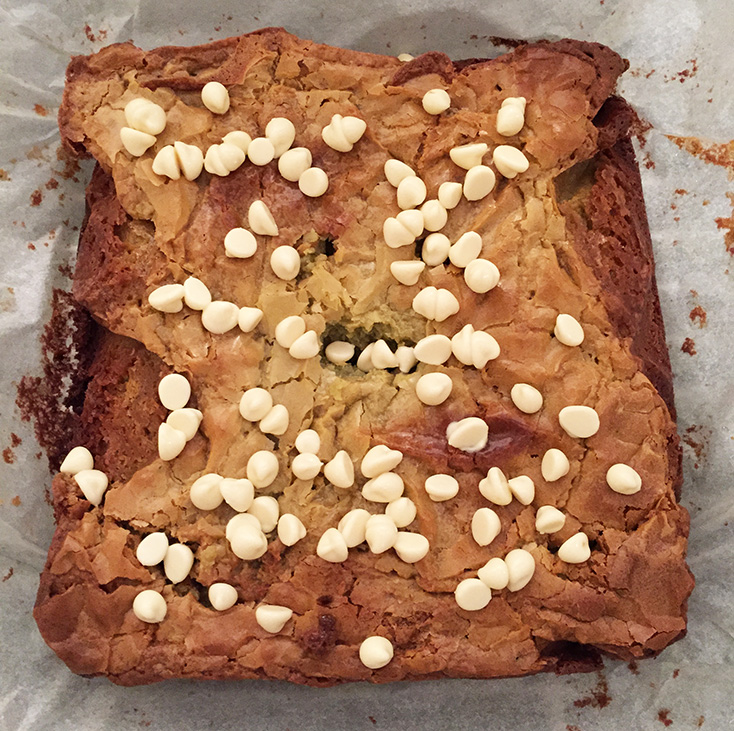 7. Remove from the oven and sprinkle the remaining white chocolate chips over the top, you’ll find that they soften and melt (heaven!). 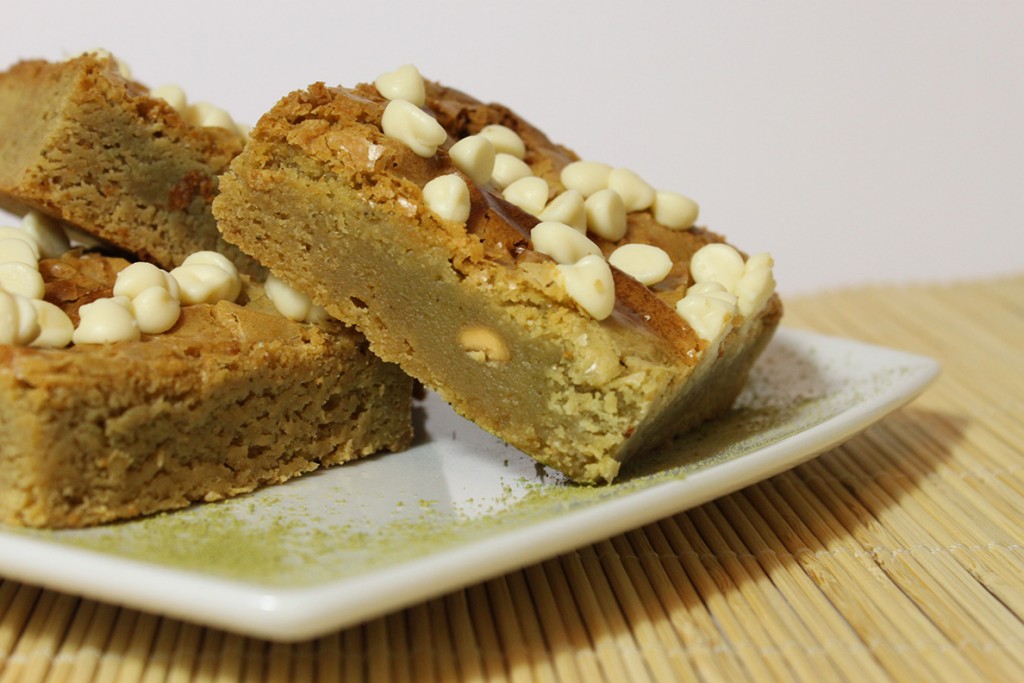 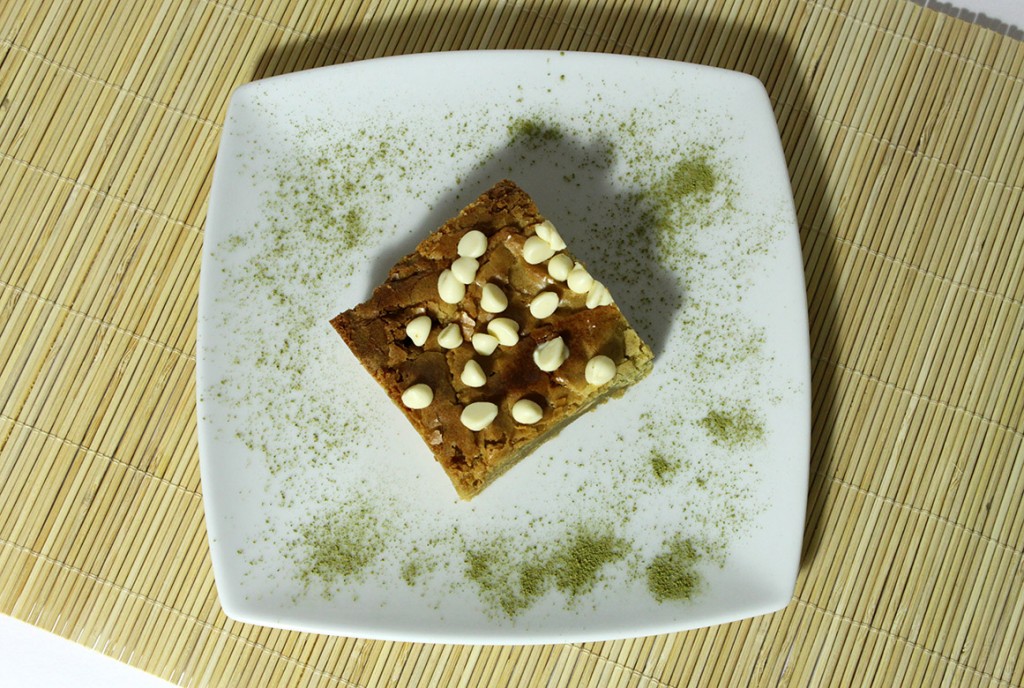 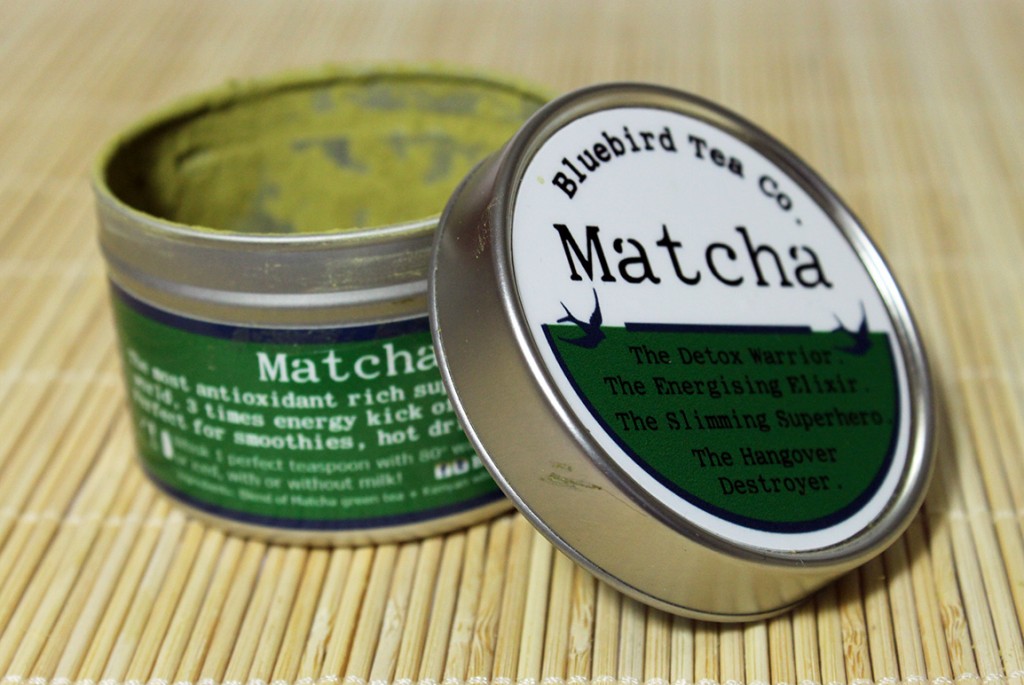 That’s it, it’s that easy. The results are mind-blowing and they’re a real crowd-pleaser. I’d love to hear how you get on making these, if you have any questions or issues making them I’d love to help via email or Twitter.

Get more recipes and reviews straight to your inbox!